About The Addo Elephant

In 1982 there were 118 elephants in the park (today approximately 600) These, together with the three elephants believed to live in the depths of the Knysna forest area the last remnants of the great herds which roamed the southern cape as recently as the latter half of the 19th century.

The Addo herd is not a separate subspecies as was once believed. The Knysna elephants, too, are of the same general type, although each group differs in some ways from the herds found in Kruger National park and farther north. Of Addo elephants, only bulls have tusks, and these are usually fairly short. Extremely well-nourished and secure in the bush, the Addo elephant has a thicker layer of fat then any other elephant in Africa.

Since the expansion of the park in 2005 some elephant bulls were brought in from the Kruger National Park to improve the Addo gene pool.

Some interesting facts about the elephant in general

The trunk an extension of the nose and upper lips, is manipulated by about 50 000 muscles and is the elephant’s most important single organ for the purposes of day-to-day survival. With its trunk it feeds and drinks (daily intake is up to 200kg of vegetation and 90 litters of water), dusts itself, trumpets, touches and smells things – and uses it as a shower. The water-holding capacity of the trunk is about 17 litres.

The low ratio between an elephants body surface area and body mass means that it has no difficulty in keeping warm – but, by the same token, it may have trouble keeping cool. Where the water is available, they wallow, bath and spray themselves. An elephant’s great ears are not only acute sensory organs: they also act as fans. As the temperature increases, the ears are flapped more frequently. This direct air currents over the body, and also exposes the inner side of the ear, where large veins pass close to the surface. An elephant’s ear is cooled by as much as 6 degrees Celsius.

Elephant are highly sociable animals, and the remarkable way they look after their own kind has always evoked a sense of wonder. Hunters found that a herd was often reluctant to desert a wounded companion, and would sometimes range themselves on either side to support it on its feet. A cow has been endangering herself by rescuing her calf from a flooded river. Similar rescues are often seen at the dams in Addo.

Today the Addo Elephant National Park is home to a wide spectrum of animals. Read more 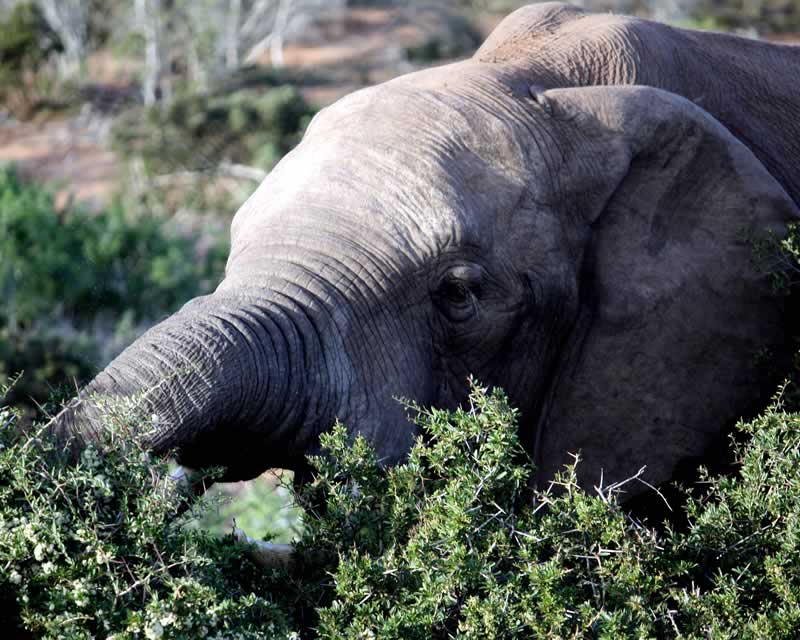